The month of March was ushered in by some severe weather conditions which battered the state of Indianapolis. At the start of the month, Wayne County was threatened by some severe thunderstorms. While no severe damage occurred, some powerlines and poles suffered wind damage. At the same time, Hamilton County was placed on a tornado watch, and residents were urged to seek shelter. Tornado sirens rang throughout the area in the early hours of the morning.

In Cass County, an EF-0 tornado touched down briefly near Royal Center. The tornado winds reached speeds of up to 70mph, and several surrounding areas were also placed on tornado watch. Another tornado was spotted near Noblesville, moving at a rate of 65mph. Several surrounding counties affected by the severe wind speeds experienced power outages as numerous powerlines were downed and trees uprooted.

As the month progressed, we saw some severe weather conditions in Crawford County. A tornado warning was issued for the area as weather professionals spotted some powerful wind circulation. In Jackson County, residents were warned to look out for flying debris as wind speeds picked up there as well. Another storm was spotted making its way towards Seymour. The storm was accompanied by 60mph winds as well as some hail. 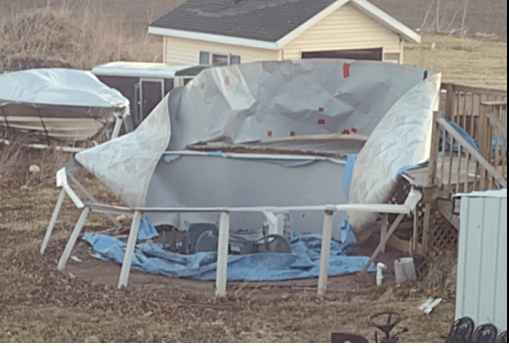 In Shelbyville, some severe thunderstorms threatened the area, with weather monitors predicting wind speeds of 60mph and a high chance of some hail falling. Residents were warned to look out for their roofing systems vehicles as the hailfall might cause some significant damage.