In the early evening hours of August 20, Sellersburg and New Albany were rocked by a storm that cropped up rapidly and somewhat unexpectedly.

The National Weather Service in Indianapolis released several special weather statements across Central and Southern Indiana warning of severe weather on the way.  With reports from multiple Facebook users that the warning came too late, the storm let loose a deluge on the community and was over almost as quickly as it started.  Residents of Sellersburg and New Albany first reported sightings of hail around 4:38pm EST and the storm had cleared enough for the Town of Sellersburg to host a Movies on the Green double feature by 7:30pm EST.

Showers and storms will move into central Indiana today. Damaging winds, hail, and localized heavy rain will all be possible, especially for this afternoon. Rain will continue through the day tomorrow as well as Monday afternoon. Remember, when thunder roars, go indoors. #INwx pic.twitter.com/dRnedno1cA

Following the initial reports of hail sightings, reports of high winds continued to trickle in.  Ultimately there were reports of quarter to half-dollar sized hail across the area as well high winds, downed power lines, power outages, and fallen trees and limbs.  Power outages were quickly addressed, and residents were fortunately not without power for very long.  Final, official reports from local sources recorded wind speeds in excess of 60 miles per hours as well as 1.00 inch hail.  Additionally, Clark County REMC reported outages for over 4400 customers throughout the area.

Reports of hail and wind damage to roofs and siding throughout both Sellersburg and New Albany have continued with one New Albany resident even reporting a branch through their roof.  With wind speeds this high and hail this large, the likelihood of damage to your home is high. 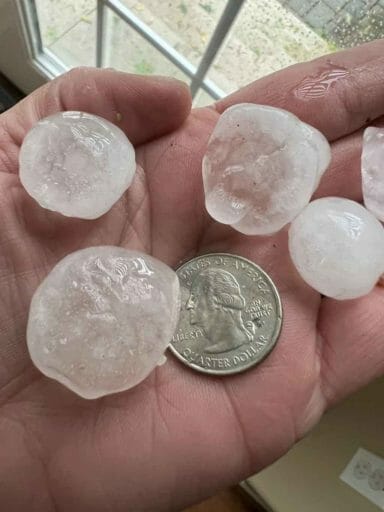 If you have concerns that this storm may have caused damage to your roof, it’s time to contact the local, trusted storm damage experts at Rojas Roofing.  Our professional crew will be out promptly to assess the damage and provide an estimate the get your roof in tip-top shape.  Not sure if you have damage?  Call anyway!  Our estimates are free, so call Noblesville’s reliable roofers, today, to discuss your options.